Spread the loveOne month after the Antone family closed its original sandwich shop at 807 Taft, the real estate where the familiar eatery operated for four decades is in new hands. 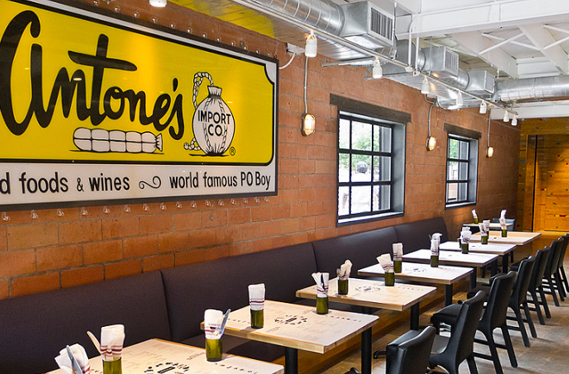 Andrew Kaldis, president of Kaldis Development Interests, is negotiating with restaurant operators to take over the former space held by Antone’s Import Co. The sale also included an 11,000-square-foot warehouse situated behind the restaurant space. The 1930s building will be converted as a multi-tenant office/warehouse work space. Kaldis says he envisions art galleries, a caterer, furniture makers or small retail users occupying the space.

The access into downtown, coupled with the growing number of businesses and residential developments in the area, led Kaldis to close quickly on the property. Just north of the site, the Federal Reserve is building a massive Houston headquarters to replace the government facility in the Central Business District. Kaldis believes area residents and office workers would welcome a nearby restaurant. “One thing I think is missing is a feeling that you can live in an area and be able to walk down the street to a restaurant or a coffee bar,” Kaldis says.

Kaldis Development Interests has been involved in several local redevelopment projects, including the Commercial National Bank Building and the Scanlan Building in the Central Business District, Hugo’s restaurant on Westheimer and Villa Serena, an historic conversion of a former orphanage to condominiums.

Real estate roundup
The local chapter of the Urban Land Institute wants to take a more active role in how real estate is developed in Houston.

Prominent developers, architects and investors participated in the event to throw in their two cents on how the project should take shape, offering ideas on design and development.
Based on some of the suggestions offered at the meeting, Metro was expected to issue a request for proposals to developers interested in partnering with the agency to redevelop the site.
More than four months later, however, the RFP has not been issued.

Apparently, the process has been delayed due to last year’s Mayoral race and the wait for new appointments to Metro’s board.

“When they do their RFP, it will be more coherent and visionary than what they had before,” says Zane Segal, chairman of the Advisory Services Committee. “These programs, on both a national and local level, allow ULI to bring focused, objective teams to issues where consensus may have proven difficult to obtain, whether for political, cultural or economic reasons.”

Located at the intersection of Knight and Fannin roads, the 204,000-square-foot medical office tower is a speculative project developed by Cambridge Properties. The building is being constructed with structural steel with precast and glass skin. Lobbies on each floor will be built out with high-end finishes including granite and architectural wall treatments, according to general contractor D.E. Harvey Builders. Houston-based PageSoutherlandPage is the project architect.
A 14-level pre-case parking garage to serve the building with spaces for more than 1,400 cars was just completed.

The tower is scheduled to open by the end of the year.

Published in the Houston Business Journal